You probably know how difficult it is to find keto-friendly BBQ sauces that don’t kick you out of ketosis but still tastes like heaven.

I have encountered 3 main problems with low-carb BBQ sauces since I started my keto journey:

Sometimes I find myself asking “do healthy low-carb BBQ sauces even exist?” Answer is Yes. I have gathered 11 delicious store-bought keto BBQ sauces you can order online.

No more wondering, searching and testing if the next bottle has maltitol in it or not (a bad thing for your blood sugar).

Also make sure to check out our keto hot sauces and sugar-free syrups as well.

Ready for a saucy upgrade? Let’s dive in.

Primal Kitchen is known for it’s low-carb, keto and paleo friendly condiments and goods. It’s no different this time.

It’s perfect for marinating your ribs, for chicken pizza or even with cheese bites. The Classic BBQ Sauce is unsweetened, and the taste is quite bold with a smoky flavor.

Primal Kitchen BBQ Sauce is probably the closest you get to traditional BBQ sauce while staying low-carb.

It’s 100% keto approved with only 15 calories and 3 grams of net carbs per serving.

In my opinion, this is the best keto friendly BBQ Sauce out there, period. I suggest trying out their 3 pack, which also include Avocado BBQ Ranch dressing and Avocado BBQ dressing.

Tessamae’s is one of the best keto-friendly condiment brands out there. All of its products are keto and paleo approved, and Whole30 certified.

From the ingredients quality perspective, it’s probably the best one out there.

The taste is not quite the traditional Texas BBQ, but hey, it’s extremely low in carbs and 15 calories per serving.

It’s quite sweet, spicy and tangly. The taste is a mix between Memphis and Carolina BBQ styles.

As I feel that Tessamae’s sauces have been a lifesaver during keto, I suggest buying the grill master pack – then you can check out all the flavors they have. Check the link below.

This is a really interesting brand. As they state on their webpage: Guy’s BBQ Sauce has a special blend of spices that enhances the natural flavor of anything it is used on.

It contains Cayenne Pepper, Xanthan Gum, and Sucralose, all of which are keto approved ingredients. It’s free of preservatives, gluten, and added sugars.

Guys Award sugar-free BBQ sauce is actually quite popular among regular people (not ketoers). Why buy sauces full of sugar when you can get this one right?

From the taste department, it’s quite sweet. It doesn’t have that bitter aftertaste that some low-carb sauces have.

It’s definitely a keto friendly store-bought BBQ sauce if you can find it from a store.

I suggest ordering it from online – cheaper and more convenient. Check the link below.

They also have a full money back guarantee (and you don’t need to send the sauce back), which shows that they stand behind their products.

From the macronutrient side, it’s quite a keto friendly with 4 grams of net carbs (which are okay if eaten in moderation).

Also, it doesn’t have any nasty ingredients that have an effect on your blood sugar.

It works great with meatloaf, BBQ ribs or even savory dishes and dips.

The taste is sweet, but unlike many other low-carb BBQ sauces, you can taste the flavor of food as well.

Stevia Sweet BBQ Sauce has been enjoyed for years at their award-winning BBQ restaurant.

It’s gluten-free, fat-free and contains 1 gram of sugar per serving (not added). Now don’t get sacred; it is still keto-friendly. The goal is to stay under 20 grams of net carbs per day.

As the name implies, it’s sweetened with keto-friendly Stevia and has 2 grams of net carbs per serving.

There are two flavors: the regular one and the spicy one. I tried the first one which gave the chicken a nice flavor.

It didn’t have any odd after taste or funny flavor. In my opinion, that’s a way more convenient choice for chicken wings than making my own.

I definitely recommend this low-carb BBQ sauce if you are rocking keto diet and want to upgrade your chicken or other meats.

It’s a sugar-free BBQ sauce that’s not sweetened with artificial sweeteners, gluten-free, fat-free, oil-free and has no preservatives.

It’s sweetened with organic Stevia to balance out the spiciness. The taste is awesome; it adds sweet, smoky, spicy and tangly flavor to whatever you pour over it on.

It has keto-friendly macronutrients with only 5 calories per serving which is extremely low, 1 gram of net carbs and zero glycemic index – yay.

In my opinion, the flavor is slightly spicy, slightly smoky and a tad sweet.

Also, the one I had, was quite thin from the texture. Not sure if it’s like that or I was just a “lucky winner” of a bad batch.

Overall I definitely suggest trying this out, it’s fantastic as a marinade and just as a sauce.

If you are on a run for a store-bought keto-friendly BBQ sauce, then you probably aren’t going to find this brand from your local grocery store.

Yep, from the one and only Jack Daniel’s Whiskey. And no, unfortunately, it won’t get you drunk. But you can taste the whiskey flavor.

From the negative side, it can be quite pricey, although most quality low-carb sauces are.

Hey, you get what you pay for at the end of the day.

I have used it once with ribs which came out great. The flavor is slightly sweet and tangy; now it doesn’t have a very strong spice.

If that’s what you are after, then check our hot sauce guide.

As they state on their website, it suits perfectly for anyone with diabetes or celiac disease. This also means that it’s keto friendly.

It has more strong “smoky” taste, so be aware of that. It works great with chicken, pulled pork and even with blue cheese.

It is low-carb BBQ sauce and definitely keto friendly, with only 10 calories and 2 grams of net carbs per serving.

All of which are zero calories, carbs, and fats.

And it also doesn’t contain any calories, fat, carbs, gluten or sugars of any kind — zero everything.

For a low-carb BBQ sauce that has zero calories, fats and carbs it actually tastes quite well.

But it’s not quite like the traditional one (c’mon it has zero calories).

It also works as a great salad dressing – just add some pepper and a teaspoon of EVOO and you are done.

If you are on a keto diet, then this is definitely worth trying out.

Trinity Hill Farms is an Oregon based business focusing on healthy condiments, marinades, and sauces.

All their products (including BBQ sauce) is sweetened with natural Stevia to enhance the flavor.

It doesn’t have any added sugar and is 100% gluten-free. It’s made with sun-ripened tomatoes, aged vinegar, onions, and gourmet spices.

Trinity Hill BBQ sauce is keto friendly with 2 grams of net carbs and also suitable for diabetics (stated on their website).

The texture is nice and thick, not very spicy but adds the BBQ flavor needed for ribs an chicken.

The Guy Gone Keto BBQ Sauce is sweetened with natural sweeteners Allulose, Stevia, and Monk Fruit – all of which are 100% keto approved as they don’t have an effect on your blood glucose levels.

The craziest part is that it also includes MCT oil. Probably the best fat you can get during a keto diet.

It’s keto friendly BBQ sauce with only 20 calories and
2 grams of net carbs per serving.

I like the taste of this BBQ sauce; it’s quite smoky.

However, the packaging is quite odd in my opinion — not the most convenient way to use a sauce.

And the price is also quite high, but if you have the resources, then it’s definitely an interesting sauce to try out.

In a hurry? Our favorite keto chewing gum is the Spry Xylitol… 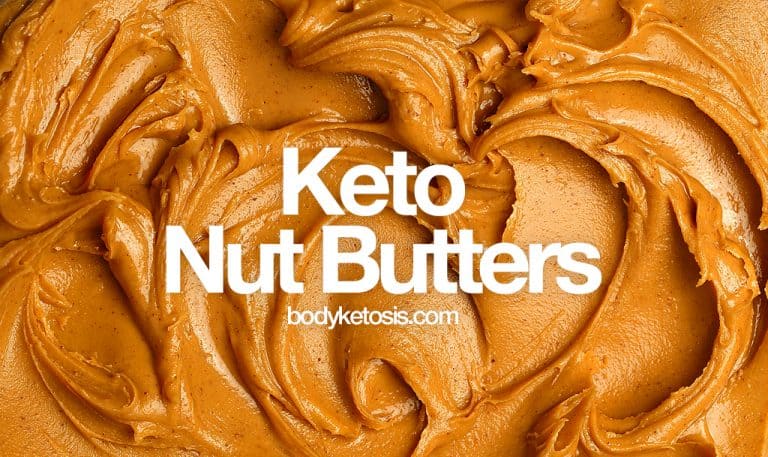 The right keto snacks will make or break your diet. Difficult times… 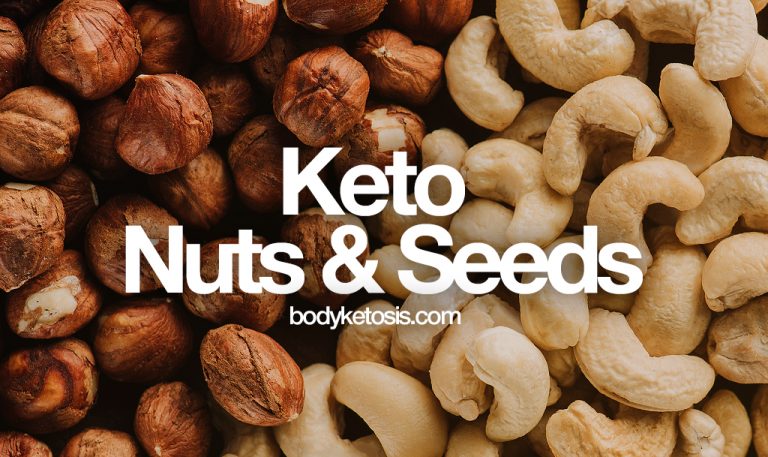 Most nuts and seeds are high in fat, moderate in protein, and… 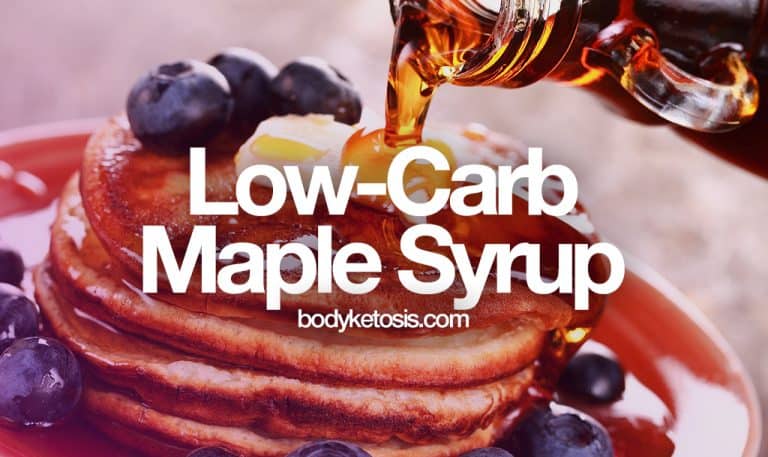